How Can Pop-up Shops Help Retailers?

Pop-up shops have very quickly moved from a quirky idea to a staple part of the retail landscape, now with a market worth more than £2.3bn in Britain alone and an estimated $50 billion worldwide.  A pop-up shop is a temporary retail space; it is a short-term store, designed to bring a long-term impact. In this blog we take a look at everything pop-up, from the philosophy behind the concept to some great examples of pop-ups done well.

It could be anything from a niche product launch to a temporary restaurant, but the one element that unites pop-up shops is the short-term nature of the retail space. Let’s take a look at what else makes a pop-up a pop-up.

These stores won’t be around long, so they need to gain attention and engage their audience straight away. This leads to some unique, funky, eye-catching designs. The quirkier the better often. The key is to understand who you are trying to attract, and what your pop-up and brand is about. The design needs to draw in the target audience and shout your brand messaging from the rooftops. Done well and the design will leave no doubt in the minds of passers-by what this pop-up is about.

A sense of urgency

The fact that pop-ups are temporary spaces leads to a sense of urgency for customers. A visit cannot be delayed. Miss it, miss out. Queues around the block just to enter a store are not unusual, and when inside panic buying can often ensue. 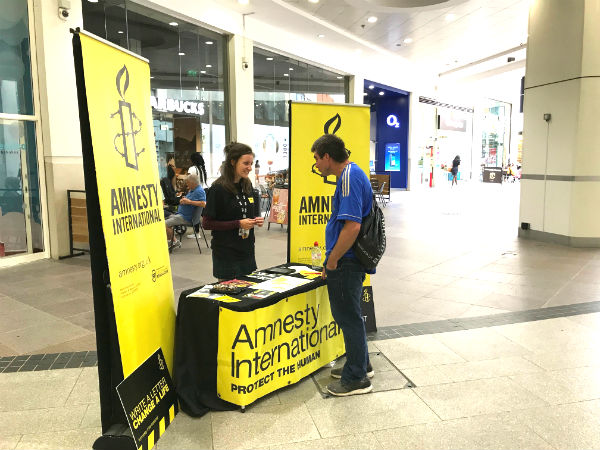 Yes, Amnesty are looking to sell subscriptions, but that can't be done until the brand story is told face to face. The pop-up allows engagement.

Whilst pop-ups can lead to a buying frenzy, very often the spaces are not actually about selling at all. The retail space is used more conceptually. It is seen as a part of the marketing mix which works to build relationships with customers, to draw them in to the brand. It is about making connections and cementing brand identity.

How can pop-ups help retailers?

It isn’t always about selling, but pop-ups are certainly an effective way for retailers to boost sales where that is their aim. The sense of urgency that surrounds a pop-up brings customers in ready to spend and desperate not to lose out. The eye-catching design of a pop-up can also serve to re-engage shoppers with a brand that had perhaps started to fall from their interest.

A pop-up can be used to test a new product or concept before launch. It can also be a cost-effective way to test the waters of a new location before signing up to a longer-term lease. In fact, research suggests that almost two thirds of new businesses will begin life as a pop-up.

A key element of repeat selling is for customers to identify with the brand. And the starting block for that is brand awareness. A pop-up store is a space where a retailer can set out to tell their brand story, to draw customers in to the fold and keep them engaged. 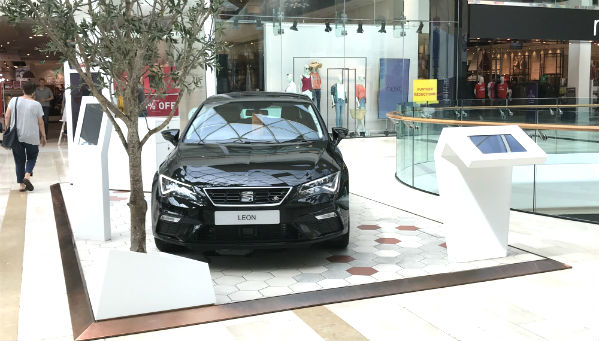 If it works for Leon, it will work for you! Car manufacturers understood the power of the pop-up long ago. This one goes beyond just parking a car in the middle of a mall.

We say product, but this could be the launch of anything really. A new album release, a new business concept, a new restaurant… A pop-up shop can act to support those tentative first steps in to the marketplace. Equally it can act as a big bang launch fiesta. The versatility of the pop-up is the very key to its success.

Bringing customers back to the high street

Pop-ups are also being used within department stores to draw new life in to this type of retail space. Department stores are operating in a tough market at the moment; they are large spaces, usually with expensive, long leases, and this is crippling many. A pop-up serves as a way to fill space within the store and to create a buzz that will draw customers back in.

Take a look at this tweet, we can take the concept even further!

So that’s the concept and reasons behind pop-up shops, let’s see how this can look in real life.

innocent ran a pop-up event in a disused tramshed. The Five for Five café offered customers the chance to purchase a two-course meal that would deliver five portions of fruit and veg for £5. The space was dressed with fruit trees and also herbs on the table, taking the brand’s fruit and veg focus in to the décor. The event was used as a way to conduct market research, bringing in customers to the fold and enabling innocent to hear customers’ views first-hand.

Nike upped the trademark sense of urgency that pop-ups bring by launching pop-up stores around Paris for just one afternoon. It was to launch their Air Max 270, and within a short time long queues had formed and all the pairs of trainers had been snapped up.

Luggage brand, Away, took over an entire hotel during Paris fashion week.  The ethos of the brand is to make travel better, so taking this idea they applied it to create a hotel concept that offered something more to those staying with them. As well as manicures, piercing and tattoo artists were on hand, there were special workshops for guests, wellness sessions, an exclusive bar… and all only available for the one week.

The pop-up shop concept went on the move with Gap, who used a converted school bus to travel around America. The seats of the bus were taken out and replaced with merchandise, bringing their clothes straight to the people in a fun and unusual way.

And it isn’t just retailers. Kanye West launched his seventh album, Life of Pablo, through a series of global pop-ups. The location was only given on social media a short time before opening, and those lucky enough to get through the queues and in to the store could purchase unique ‘TLOP’ merchandise and other items designed by Kanye.

So far we have looked at well-known brands, but pop-up shops are by no means a concept only for the big players. Bulk Market, is a pop-up bringing zero-waste to London, responding to the growing awareness amongst consumers on the environmental impact of plastic packaging. Similar initiatives have sprung up over the country and Bulk Market is now crowdfunding to bring a permanent store to Londoners. This is a great example of how something that starts off niche can use pop-up retail to move in to the mainstream.

We can even go in the opposite direction, in the example below Krispy Kreme closed their shop down to set up a stall only a few metres from their previous location. 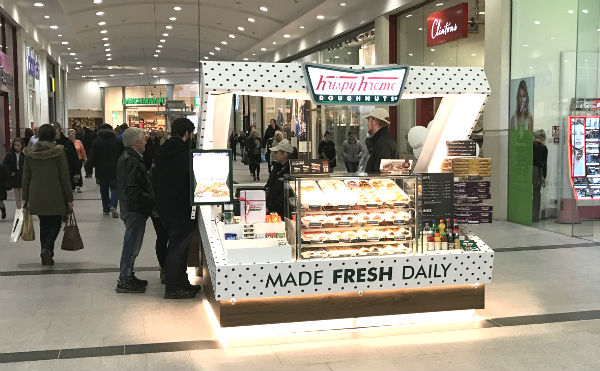 Was the pop-up concept so successful that it became permanent?

What can we learn?

This obviously is but a tiny snapshot of the great pop-ups there have been, there are so many excellent examples we could have chosen. And I think this goes to show what a success the pop-up store is. With unusual designs and concepts, pop-ups bring interest and excitement – two areas where traditional retailing has faltered. Pop-up shops are bringing life back to the high street, they are creating an enthusiasm within retail that we had almost forgotten could exist.

Pop-ups are to retail, the Uber of the taxi world, the AirBnB of the hotel industry, and the Netflix of the entertainment world. It has taken an existing concept and by twisting it, just a little, has managed to create a whole new way of doing things.

In a struggling retail environment, pop-up shops are bringing new life and opportunities to the market. Though each pop-up may only be temporary in nature, we can see that the pop-up concept is here to stay for the long-term.

The versatility of pop-ups is the key to its success. Equally applicable to tiny start-ups as to multi-million pound brands. They can be used for products, for restaurants, record launches, concepts… Who they are used by, and what they are used for is unimportant. The pop-up works for everyone, and this is why it is seeing such success in the retail landscape.