Home > News > Apple Store - Can we learn from the concept?

Apple Store - Can we learn from the concept?

The apple of her eye

Angela Ahrendts, senior vice-president of retail at Apple, and previously CEO of Burberry, spoke recently at Cannes Lions, an international festival in France. She talked at length about Apple’s approach to retail and we want to share with you some of what she had to say.

In a retail environment where other large retailers are collapsing around them, Apple successfully operates more than 500 stores around the world and continues to open new ones. So, what can we learn from Ahrendts? 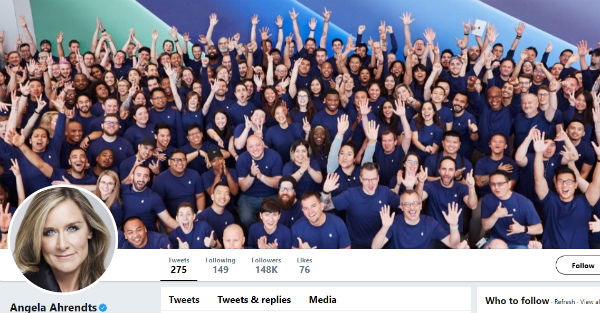 The store is a product

Ahrendts describes stores as Apple’s ‘biggest product’. That’s quite a departure from the traditional retail approach where shops are essentially seen as giant containers in which to sell your products. An Apple store is not a vessel to sell, it is a product in its own right.

And I really like this analogy. With online shopping growing ever bigger, and the likes of Amazon going from strength to strength, a store needs to offer something more than a product, which after all can always be found somewhere cheaper at the click of a button.

Apple stores are expanding, they are revamping the inside space, changing the layout.

“We’re not opening small stores, we’re taking the small stores and doubling or tripling the size of them to accommodate a forum and we’re only opening big stores in the future that can handle it”, said Ahrendts.

All this is to ensure each store can offer an experience to customers that goes beyond the selling of products. Ahrendts has developed ‘Today at Apple’ which invites customers in to workshops and special events. There are also Apple Camp workshops for children. The idea is to emphasise communal gathering, to create a sense of community, and to encourage interactivity. It is this mix of brand and community identity which draws customers in and encourages loyalty to the Apple brand.

It isn’t just about what they do in the stores that is important at Apple, there is also strategy in how the stores are presented. All the décor, furniture, flooring, ceilings, glass…all of it is exactly the same in the Apple stores as you would find in their head office at Apple Park in Cupertino, California.

This consistency is important in the presentation of the brand and in the brand identity that, with the events we have discussed above, customers are drawn in to. It is also a visual way to communicate the philosophy they are trying to convey that there is one Apple community, from head office down to store staff through to the customers of Apple products, everyone is an important part of it.

Ahrendts has also been surveying customers about the store experience. Her aim is not to measure quantative things but to gain an understanding about how the customer feels.

The importance of staff 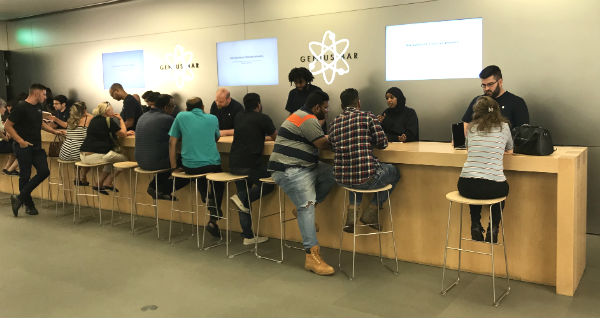 Ron Johnson, the former Senior Vice President for Retail, has often referred to the Genius Bar as the "heart and soul of our stores" (Genius bars offer customer support in the actual store)

This is a big one for Ahrendts, she hit the nail on the head when she said,

“They’re our ambassadors, they’re our greatest differentiator. This is something that Apple has that Amazon and Alibaba and nobody else has – people on the front line. And remember they’re hired to this day to enrich lives”.

As part of this Ahrendts is keen to stress that staff do not work on commission or have sales quotas, Apple hires people for their empathy. She also works closely with store employees, saying,

“I’ve told them that my job is to enrich their lives as much as they do the customers they serve and so I want to unlock their creative thinking”.

Apple utilises an internal social media platform to crowdsource ideas and views about how the stores are running.  For Ahrendt it is all about the human connection and recognising the important role shop-floor staff play.

Can all this really make a difference? Isn’t retail a doomed market?

Not according to Ahrendts,

“But”, she goes on to say, “it has to evolve, it has to continue to move. And I think it has to serve a bigger purpose than just selling”.

And that’s certainly what she is doing. From how the stores look, to what goes on within them, Ahrendts is doing things differently. Apple stores continue to evolve and move on. They are not about selling, they are about the Apple community and so far, this looks to be a winning formula.

Thank you to the creative community who joined us at #CannesLions today to hear about #TodayatApple and how our retail experience inspires learning, unlocks creativity and encourages human connection. pic.twitter.com/64i4NL9SeY